The dragonfly is an insect belonging to the order Odonata, the suborder Epiprocta or, in the strict sense, the infraorder Anisoptera. It is characterized by large multifaceted eyes, two pairs of strong transparent wings, and an elongated body. Dragonflies are similar to damselflies, but the adults can be differentiated by the fact that the wings of most dragonflies are held away from, and perpendicular to, the body when at rest. Dragonflies possess six legs (like any other insect), but most of them cannot walk well. Dragonflies are some of the fastest insects in the world.

Dragonflies are valuable predators that eat mosquitoes, and other small insects like flies, bees, ants, and very rarely butterflies. They are usually found around lakes, ponds, streams and wetlands because their larvae, known as "nymphs", are aquatic.

Formerly, the Anisoptera were given suborder rank beside the "ancient dragonflies" (Anisozygoptera) which were believed to contain the two living species of the genus Epiophlebia and numerous fossil ones. More recently it turned out that the "anisozygopterans" form a paraphyletic assemblage of morphologically primitive relatives of the Anisoptera. Thus, the Anisoptera (true dragonflies) are reduced to an infraorder in the new suborder Epiprocta (dragonflies in general). The artificial grouping Anisozygoptera is disbanded, its members being largely recognized as extinct offshoots at various stages of dragonfly evolution. The two living species formerly placed there — the Asian relict dragonflies — form the infraorder Epiophlebioptera alongside Anisoptera.

Tillyard claimed to have recorded the Southern Giant Darner flying at nearly 60 miles per hour (97 km/h) in a rough field measurement. However, the greatest reliable flight speed records are for other types of insects. In general, large dragonflies like the hawkers have a maximum speed of 10–15 metres per second (22–34 mph) with average cruising speed of about 4.5 metres per second (10 mph).

Damselflies (suborder Zygoptera), typically being smaller than dragonflies, are sometimes confused with newly moulted dragonflies. However, once a dragonfly moults, it is already fully grown. There are other distinctions that set them apart: most damselflies hold their wings at rest together above the torso or held slightly open above (such as in the family Lestidae), whereas most dragonflies at rest hold their wings perpendicular to their body, horizontally or occasionally slightly down and forward. Also, the back wing of the dragonfly broadens near the base, caudal to the connecting point at the body, while the back wing of the damselfly is similar to the front wing. The eyes on a damselfly are apart; in most dragonflies the eyes touch. Notable exceptions are the Petaluridae (Petaltails) and the Gomphidae (Clubtails).

The largest living odonate by wingspan is actually a damselfly from South America, Megaloprepus caerulatus (Drury, 1782) while the second largest are females of the dragonfly Tetracanthagyna plagiata (Wilson, 2009). The female T. plagiata is probably the heaviest living odonate. 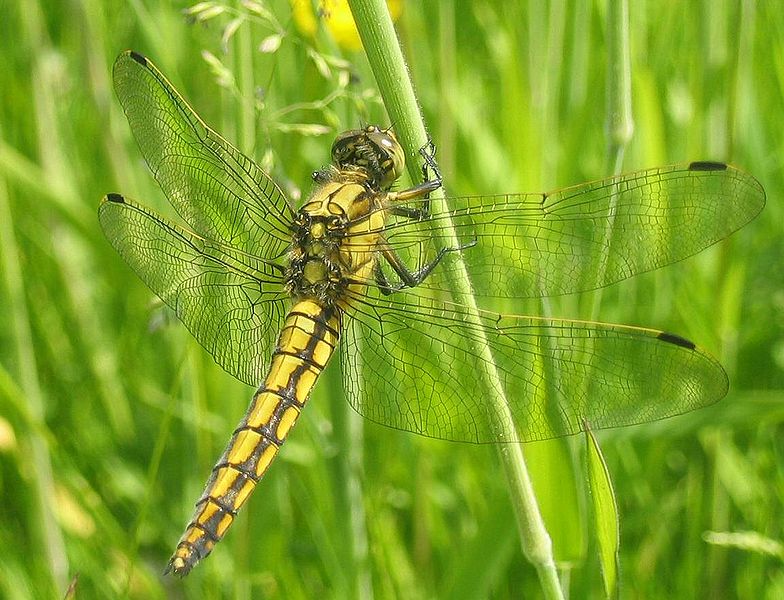