Situated at the crossroads of several commercial routes, Constanta lies on the western coast of the Black Sea, 185 miles from the Bosphorus Strait. An ancient metropolis and Romania's largest sea port, Constanta traces its history some 2,500 years. Originally called Tomis, legend has it that Jason landed here with the Argonauts after finding the Golden Fleece.

Founded by Greek colonists from Miletos in the 6th century BC, Tomis was conquered by the Romans in 71 BC and renamed Constantiana by Roman Emperor Constantine the Great in honor of his sister. The name was shortened to Constanta during the Ottoman era. During the 13th century, Italy, especially Genoese merchants, dominated the Black Sea and Constanta flourished, only to decline two centuries later under Turkish rule.

Fine mansions and hotels were built in the 19th century when King Carol I decided to revive Constanta as a port and seaside resort.

The third largest city in Romania, Constanta is now an important cultural and economic centre, worth exploring for its archaeological treasures and the atmosphere of the old town centre. Its historical monuments, ancient ruins, grand Casino, museums and shops, and proximity to beach resorts make it the focal point of Black Sea coast tourism. Open-air restaurants, nightclubs and cabarets offer a wide variety of entertainment.

While in the area, you can visit traditional villages, vineyards, ancient monuments and the Danube Delta, a bird-lover's paradise.

Constanta is more than just the entry point to the Black Sea coast. It is a place with a long and interesting past, attested by its many Roman vestiges, historic buildings, facades and mosques that color the Old City Centre.

The Romanian Mosaics A vast complex on three levels once linked the upper town to the harbor. Today, only about a third of the original edifice remains, including more than 9,150 sq ft of colorful mosaics. Built toward the end of the 4th century AD and developed over the centuries, it was sthe city's commercial centre until the 7th century. Archeological vestiges point to the existence of workshops, warehouses and shops in the area. Remains of the Roman public baths can still be seen nearby. Aqueducts broght water six miles to the town.

The Genose Lighthouse (Farul Genovez) Soaring 26 feet, the lighthouse was built in 1860 by the Danubius and Black Sea Company to honor the Genuese merchants who established a flourising sea trade community there in the 13th century.

The Casino (Cazinoul) Completed between the two World Wars in art nouveau style according to the plans of the architects, Daniel Renard and Petre Antonescu, the Casino features sumptuous architecture and a wonderful view of the sea. The pedestrian area around the Casino is a sought-after destination for couples and families, especially at sunset. 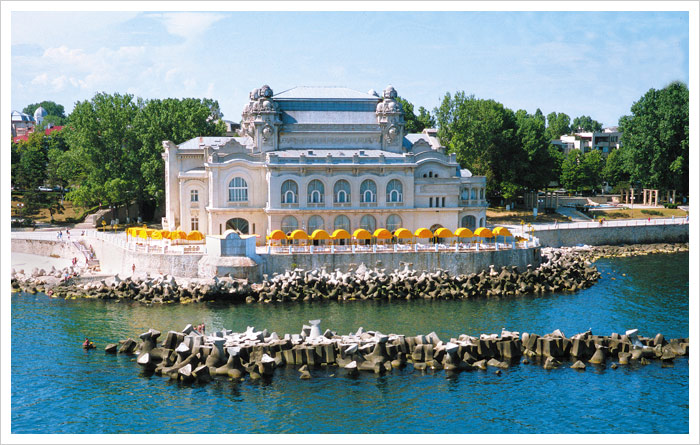