Officials who were interested in the Danube mouth area had Enisala fortress built in the second half of the 14th century. The fortress had military purpose, serving as a watch point towards land and water routes.

Analyses of the buildin techniques, archaeoloical material and historical data have lead experts to advance the hypothesis that only the Genoves tradesmen could have built Enisale fortress as they were interested to reinforce the fortress system in the north of Dobrudja overlooking the Black Sea and they also accumulated great wealth as result of their holdin the monopoly of commercial sailing on the Black Sea.

The irreular polyonal blueprint of the fortress observes the sinuosities of the Jurassic limestone mountain on which it was built. The surrounding walls, towers and bastions made of local small size limestone blocks roughly carved are still rising 5-10 meters high at some points.

The main gate bastion displays a particular architecture with double archway of Oriental origin. Byzantine architects in the Middle Ages would frequently use double archways when raising various buildings in the Balkans or the Romanian Principalities: Neamţu Stronhold, Royal St.Nicolas Church in Curtea de Argeş or some Moldavian churches founded by the voyevod Stephen the Great.

Enisala was part of the line of defence of Ţara Românească Principality during the rain of Mircea the Old „... ruler of the whole Ţara Românească (Romanian Country) ... down to the Great Sea” (1397-1418) An Ottoman military garrison was set up in Enisala after the conquest of Dobrudja by Turks in 1419/1420.

Enisala held an important position in the 14th and 15th centuries. Then the Ottoman rule extende beyond the Danube mouth up to Cetate Albă and Chlia and sand banks formed separin Lake Razim from the Black Sea. Therefore Enisala was abandoned in the course of the following centuries as it no loner served its purpose.

Today Enisala fortress is one of the most important touristic hihlights of Dobrudja resisting the restless wind and its captivating history. 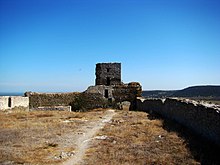